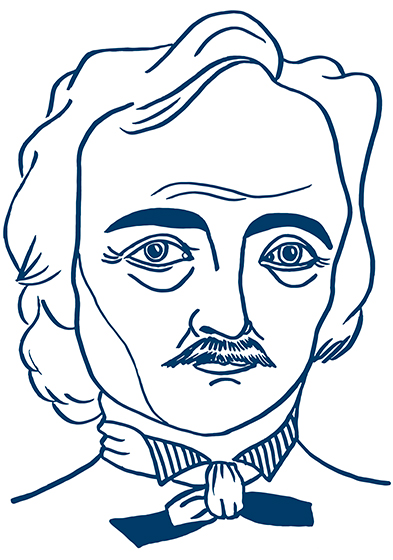 “We plainly saw that not a soul lived in that fated vessel! Yet we could not help shouting to the dead for help!”

On October 7th 1849, at the age of 40, the most valuable and controversial American writer of his generation, the poet, critic and journalist Edgar Allan Poe (Boston, January 19, 1809) died at the Washington Hospital College. Four days before he had been picked up from the streets of Baltimore, found in a delirious state so that no one could explain how he got there or the reasons for his terrible state. According to some witnesses of those days, during his agony Poe kept repeating a name: “Reynolds”.

For Julio Cortázar, it was no accident: J. N. Reynolds was the name of the polar explorer that he admired, who had presented to the United States Committee on Naval Affairs a project for an expedition to Antarctica in 1836 and who, presumably, inspired the passages dedicated to the Pole in his first, unique and mysterious novel The Narrative of Arthur Gordon Pym of Nantucket. Other sources include ancient seafaring legends such as the Flying Dutchman and readings by Daniel Defoe and T.S. Coleridge.

Published in 1838, first in installments and then in book form, it narrates the first-person adventures of its protagonist, Arthur Gordon Pym on his way to Antarctica, first on board the whaler Grampus and then the schooner Jane Guy. Mutiny on board, murder, apparitions, cannibalism, ambushes by savages and an unexpected and enigmatic end to this novel, which is a story of seafaring adventures so popular in its time as well as a profound exploration of the human mind and soul that, being Poe, could not have any other result than the horror of the atmosphere and the psychological abyss of its characters.