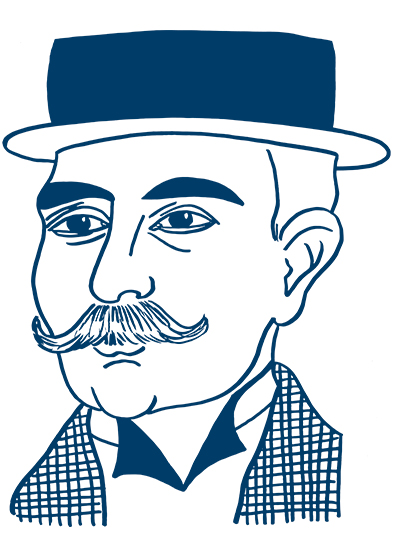 “When the sun rose on the horizon, it was still about fifteen miles from the shore, but there was no so much as a breath of wind to fill the sail. The sea was deserted. Not a single ship was visible on the horizon, nor any black specks to indicate the presence of a launch.”

The Pirates of Malaysia (1896) is the 4th of Emilio Salgari’s novel (Verona, 1862-Turin, 1911) and the 3rd of the so-called series Pirates of Malaysia or The Sandokan Series, which would bring the author to fame as an adventure novels’ writer. Their main character is Sandokan, the prince of Borneo deposed by the English, against whom he plots revenge becoming a pirate and, with it, a plague for the British Royal ships in the area, acquiring “the Tiger of Malaysia” as a war name.

In this installment, Salgari makes Sandokan’s fate coincide with that of Tremal Nalik, a character who had already appeared in the previous novel, The Mysteries of the Black Jungle, and whom he rescues after being taken prisoner by James Brooke, the colonialist rajah of Sarawak and arch-enemy of Sandokan that was inspired by a real character. In the background, the romantic story of the Bengali Tremal with Ada, an English woman, reminds the fierce pirate of his own unfortunate love affair with Mariana, who happened to be her cousin. A story full of danger, combat, poisoning and romance with the intriguing and exotic South China Sea in the background, where piracy was an ancient and common practice among the people who inhabited it, especially among the illanum, famous for their ferocity and against whom James Brooke fought a famous battle in 1862.

A curious fact that exemplifies the powerful and characteristic imagery in Emilio Salgari’s work is that despite his prolific descriptions of the geography, nature and customs of the region, these come mainly from other literary sources since the writer, who was also a sailor but not a captain as he used to say, never sailed those seas and never even travelled outside Italy in his entire life.