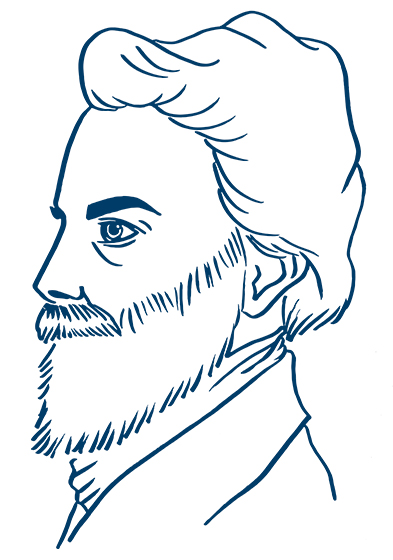 “For some time past, though at intervals only, the unaccompanied, secluded White Whale had haunted those uncivilized seas mostly frequented by the Sperm Whale fishermen.”

“Few books are as capable as Moby Dick of telling a tragic story that turns out to be both a personal and collective destiny. This is how the critic and publisher Constantino Bertolo sums up the essence of Herman Melville’s book (New York, 1819- 1891), praised as top of world literature but bringing nothing than criticism and disappointment to its author, when it was published in 1850.

Long before he wrote Moby Dick, when only 19, Melville, of lineage descendant, had enlisted as a cabin boy aboard the ship St. Louis Lawrence, on a round trip from New York to Liverpool. This was the first of his sea experiences, but not the only one, as he re-embarked two years later, this time on the Acushmet whaling ship, that took him from Massachusetts to the Pacific through Cape Horn. Young Melville remained on some of those islands for some time, working as a harpooner until he was able to return to Boston in 1844 as a sailor on the warship “United States”. Perhaps it was during that expedition that he first heard of a giant white sperm whale, first sighted around 1810 off the coast of Chile and which the sailors called “Mocha Dick”, for associating it with the island of Mocha, belonging to the Andean country. Or perhaps by then he had already read the story that Jeremiah N. Reynolds published in 1839 in installments for The Knickbocker magazine under the title Mocha Dick: Or The White Whale of the Pacific: A Leaf from a Manuscript Journal about the existence of this monstrous marine animal, its battles against whaling ships (the most famous, the sinking of the ship Essex, in 1820) and its attributed invincibility.

Be that as it may when, little more than a decade later, the already renowned writer Melville decided to dedicate his efforts to a work where he could pour out his direct experiences of life at sea, the scientific knowledge gained in his time and the fantastic stories that populate the oceans and he chose the great white whale whose echo had been following him for some time. This is how he forged one of the most brilliant and evocative sea stories known to date: the one of the old Captain Ahab, obsessed with the capture of the whale that has left him mutilated, leading his crew and himself to self-destruction. A story full of realism, for its detailed and almost encyclopedic description of whaling, but also full of symbolism: from the biblical names of its character to the parable that is established between the events on board the Pequod and The Book of Jonah and of course, Moby Dick himself, that fierce and punishing leviathan, the incarnation of the forces of nature which, as an almighty god imposes his will on men and seas.