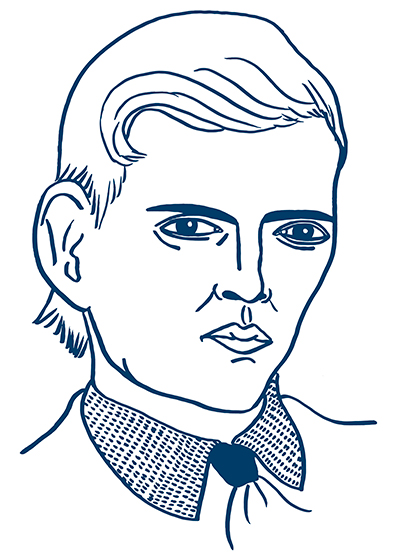 “It was uncanny, this rising sea in a dead calm, and their voices unconsciously sank lower. Old Parlay shocked them with his abrupt cackle.”

There is no such thing as kindness in Jack London’s South Sea Tales (San Francisco, 1976-Glen Ellen, 1916). There is no kindness as there is no sea, except as a background to some terrible and violent stories that ironically take place in one of the most beautiful places of the planet: the exotic and far away islands of the South Pacific, Polynesia. To some extent, this is only logical: the world that London depicts is the world of European colonial adventure in those regions, where the excessive ambition of some faces the ferocity and savagery of others. A reality that the author of these stories knew very well since, in 1896, when only 17, he had joined the schooner Sophia Sutherland as a sailor on his way to the seas of Japan, in the middle of the Russian-Japanese war. From that short adventure he may have collected knowledge about those seas and those people that were later portrayed with as much imagination as realism. However, that was not his only contact with the seas: in 1899, he bought the schooner Razzie-Dazzie and dedicated himself to oyster piracy, to later become a member of the California fishing patrol. All these experiences led him to write two of his most important works: the novel The Sea Wolf (1904) and the Tales of the Fish Patrol (1905) as well as this handful of stories, halfway between cultural anthropology and seafaring adventure, both very fashionable in their time.

This way, there is room for characters such as Koolau the leper, to show us the saddest and most inhuman side of the slave trade; Mauki, condemned to a perpetual slavery from which he can only be freed by crime; or Bella, trapped in a loveless marriage. Even ‘the inevitable white men’ —the Europeans — are not missing: like the good missionary John Starhurst or the evil Schemmer, the terrible German foreman. There is, however, no moralistic intention in the stories. For London, a firm Darwinian, these are simply men confronted with the cruelty of nature or other men’s, in an eternal struggle where the good does not always win – while the strongest does. Names like Kauai, Malaita, Hawaii, Fiji, Tahiti, Paumotu … they will no longer be just the pleasant image of a tourist postcard but, after reading London, they’ll be the reminder that even the most sublime paradise can hide abysmal hell.