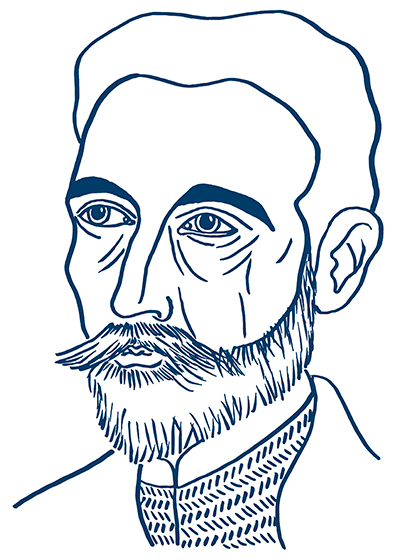 “To the imperishable sea, to the ships that are no more, and to the simple men who have had their day”.

“The mirror of the Sea”. Joseph Conrad

The writer we know as Joseph Conrad ( Berdyczów, Poland, December 3rd, 1857 – Bishopsbourne, UK, August 3rd, 1924) joined the ship “Mont Blanc” in Marseille, France, as a sailor at the age of 17 and this is how he “took off” to a world of travels and adventures: the world of the sea and ships, which he would not leave until 20 years later, to eventually ”dock” not to an unknown land but to the most disembodied and complex world of literature.

Between one point and another of that long expedition, dozens of crosses traced in pencil like a nautical chart marked the intersection of his life’s paths, from his beginnings as a crew member on coastal ships in the port of London to his subsequent role as officer and captain of the British Navy on English and Australian vessels. A vast universe of professional and human experiences that he left conveyed to novels like Almayer’s Folly (1895), The Black Man of Nostradamus (1897) or Lord Jim (1900) but which undoubtedly reached its most faithful and detailed reflection in The Mirror of the Sea (1906). Unclassifiable and modernist, this is an autobiographical and nostalgic text thru which Conrad pays tribute to an art and a way of understanding the sea (sailing) that would disappear to leave space to new technological advances together with the men who made it possible. In his own words “the best tribute that my piety can pay to the shapers of my character, of my convictions and, in a certain sense, of my destiny”.