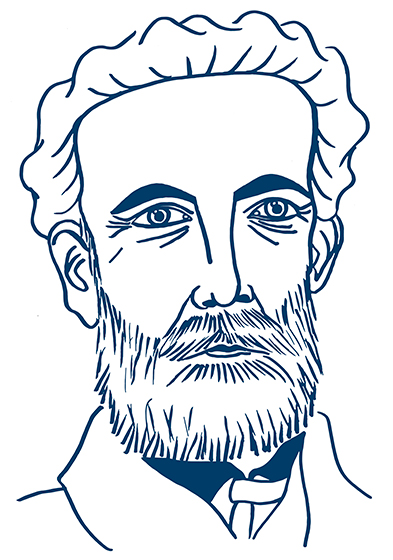 Jules Gabriel Verne (Nantes, 1828 – Amiens, 1905) is regarded not only as one of the most important writers of French and international literature, but also as the “father” of science-fiction, a genre that owes so much to his innovative wit and style. Fascinated by the scientific and technical discoveries of his time and anticipating with a great vision those to come in the 20th century, Verne created a fantastic universe where, thanks to electricity and new machinery and tools, men were capable of extraordinary exploits never even dreamed of. This imagery was faithfully screened in the series of novels he wrote over forty years, collected under the title “Extraordinary Journeys” and that includes famous works like Five Weeks in a Balloon (1863), Journey to the Centre of the Earth (1864), From the Earth to the Moon (1865) and Around the World in Eighty Days (1870).

In 1869, a year before being published in France by the Magasin d´Èducation et Rècrèation, one of Verne’s most emblematic works from the series and for some critics his greatest work ever, 20.000 Leagues under the Sea, was published in Spain by Tomás Rey y Cía. Following the model of traditional adventure novels, it tells the story of Professor Pierre Aronnax, an eminent biologist determined to know the origin of some strange marine sightings, an investigation that leads him unexpectedly aboard the Nautilus, an underwater futuristic vessel, designed, built and led by the mysterious Captain Nemo (“nobody’s Latin,” is the name Odysseus uses to outwit Polyphemus), a character that many critics have seen as a representation of the author himself. Together, they roam the previously unexplored ocean floor, discovering unknown creatures and landscapes, and even sunken continents, like the legendary Atlantis. Mixing real facts with scientific data and a great deal of imagination, Verne manages to describe in astonishing detail a world that still remains unknown in many respects today.

An example of the mix of reality and fantasy that permeates the novel, is the chapter dedicated to the Bay of Vigo, which reports the events related to the battle of Rande, where Spaniards and Englishmen confronted each other, during the War of Spanish Succession, on 23 October 1702. Verne attributes the great wealth of the main character, Captain Nemo, to treasure plundering from the Spanish galleons that, loaded with the largest shipment of wealth from the Americas known until then (the so-called Silver Fleet) had been sunk in the Vigo estuary during that battle.

Curiously, before the publication of 20,000 Leagues under the Sea Verne had never visited Vigo and it was not until 1878 that he visited the city aboard his yacht Saint Michel III, that he sailed along the bay of San Simón, whose depths he had described so well in his already famous novel.

Verne, Julio (2015) Twenty Thousand Leagues Under the Seas: An Underwater Tour of the World (translated by F.P. Walter). Digireds Publishing.