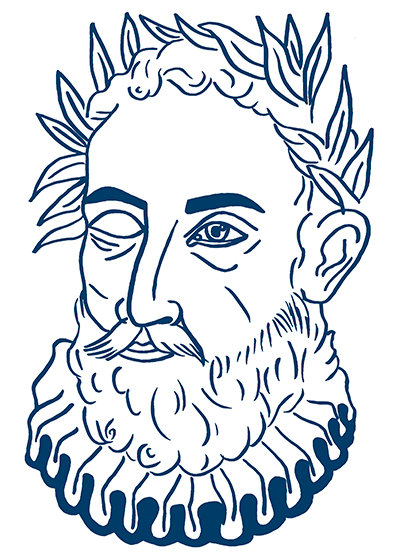 “The feats of Arms, and famed heroick Host,

who o’er the waters ne’er by seaman crost,

forceful in perils and in battle-post,

with more than promised force of mortal hard,

and in the regions of a distant race

rear’d a new throne so haught in Pride of Place;”

The name of Vasco de Gama (Sines, Portugal, 1460 – Kochi, India, 1524) is engraved in golden letters in the list of the great navigators of all times and in the list of the great transoceanic voyages that marked the so-called “age of discovery”, a period of almost two centuries during which Europeans, mainly Spanish and Portuguese, opened new routes for world trade. The Portuguese sailor was responsible for one of the most important milestones of this great adventure: accomplishing the first direct journey from Europe to India along the African coast, the longest oceanic journey ever made, the one that would confirm the theory that India was accessible by sea from the Atlantic Ocean which Bartolomeu Días, Pêro da Covilhã and Afonso de Pavia had already tried to demonstrate.

Such an epopee needed a poet of equal height and Luíz Vaz de Camôes (Lisbon, 1524-1580), considered the most important poet of Portuguese Renaissance, would be the one in charge of this mandate. Published in 1572, Os Lusiadas is the elegiac narration of Vasco de Gama’s first voyage, although it was meant to sing the glory of the Portuguese empire from its origins to the date it was written. The name “lusíadas” (“the sons of Luso”) refers to the son of Bacchus from whom, according to the mythical account, the Portuguese descend.

Divided into ten songs, each composed in royal octaves —the verse par excellence of Renaissance —, the poem — like The Odyssey, to which it is a model— begins in the middle of the action, with Gama and his crew sailing the Indian Ocean while the previous adventures originated from the Tagus River are also told; from the landings in Mozambique, Mombasa, Melinda to the following the victorious arrival in Calicut (Calcutta). The trip back to Portugal is also described while the discovery of a new sea route to India is announced. Just like the Greek poem, Camôes’ gives a certain stress to how the gods intervene in the destiny of his characters, by having Venus escorting Vasco da Gama throughout his journey, in defiance of Bacchus, who opposes to her, jealous of the glory the Lusitans would receive if they managed to reach the East.

To note is that a large part of these territories were not unknown to Camôes himself, to whom some historians attribute kinship with Vasco de Gama: he had participated as an expeditionary in India and China, and on one occasion he was even forced to remain in Mozambique for two years. Back to Portugal in 1570, just two years before the publication of Os Lusiadas, he was granted alimony by King Sebastian in recognition of his services to the Crown that still could not save him from poverty.

Unlike his great hero, who became viceroy of Portuguese India, the poet did not enjoy any other glory than the literary one, perhaps the most enduring of all, according to Borges:

I want to know if before the final

that everything that had been lost, Occident

and Orient, steel and flag,

would survive (indifferent to all human

changes) in your Lusitanian Aeneid.