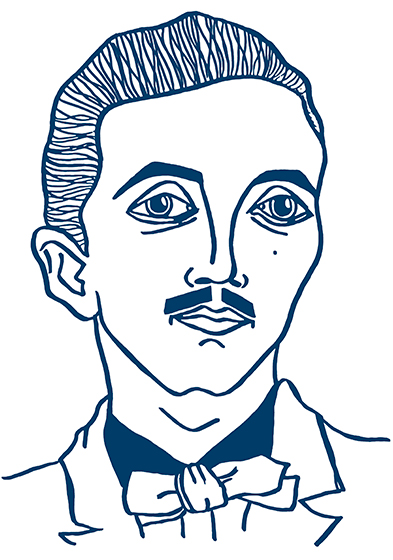 “The ship was sailing along

left to him by the old sailors

And the goodbyes carried on the sails

printed by the definite

One day he set sail

with the word mowed on the lips

And he never came back.”

De catro a catro. Follas sin data sin data d’un diario d’bordo (From four to Four, log book notes with no date) was the only book of poems published by Manuel Antonio Pérez Sánchez during his lifetime (Rianxo, A Coruña, 1900 – 1930) but it was enough to make him one of the leading figures of avant-garde literature in Galician language. Published in 1928 by the publishing house Nós, with illustrations by Carlos Maside, the appearance of the book meant a stylistic and formal break with the poetic production of its surroundings, as well as the introduction of new themes that distanced it from the predominant modernist poetry of the early 20th century and brought it closer to the Spanish and European avant-garde poetics of the time, such as Creationism and Futurism.

Manuel Antonio, whose early literary vocation led him to enter Galician literary circles and to sign the manifesto “Máis Alá! “, was influenced by poets like Vicente Huidobro or Pierre Reverdy; however, his aesthetic references were not only literary. One of the strongest was the one of French theorist and movie director Jean Epstein, whose book La poésie d´aujourd´hui, un nouvel état d´intelligence (1921), Antonio translated into Galician. Epstein, a master of cinema as a purely visual art, was a strong advocate of the autonomous poetry of images, as well as of disruptive sequence and the space-time logics of images. “There are no stories, only situations without beginning, development or end,” he said. Also Epstein, by the way, would find in the sea the inspiration for his work, as from 1929 he settled in the Finisterre, in Brittany, France, producing several movies based on this theme.

All this grounding is found in De catro a catro, the notebook that gathers the verses he wrote between 1926 and 1927 on board the Constantino Candeiras ship, while practicing as a pilot and where he describes daily life at sea, as if they were unrelated shots of a film. To this end, he uses both the juxtaposition of new images and a very elaborate language in which he introduces many technical sailing terms. None of this, however, detracts from the emotion or feeling these poems convey: their avant-garde style also lies in the ability to capture human fragility and loneliness in the midst of the great spectacle of nature. As the poet César Antonio Molina points out: “Manuel Antonio, situated at the end of a world that is still romantic, intimate, sentimental and perfectly rooted in rural and marine nature, raises these basic elements of the old man, uniting them to the new world already perceived as something inevitable after the smoke of the steam seen from the last sailboats”.