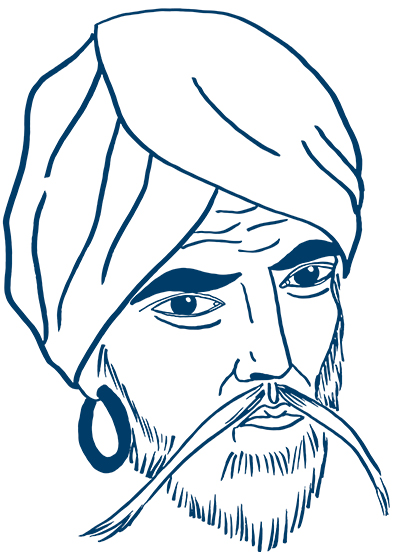 “In the course of this voyage in the Indian seas, I saw wonders without number, amongst others a fish like a cow and others like asses; and I saw also a bird that comes out of a sea-shell and lays eggs and hatches them on the surface of the water, never coming up from the sea to the land.”

“One Thousand and One Nights”. Anonymous

On the night of the 290th anniversary of her captivity, while she tries to postpone the moment when she will be beheaded by King Shahryar, the talkative and imaginative Scheherazade gives shape to one of the most extraordinary narratives of literature of all times and one of those that has had the greatest influence on other universal creations: the story of Sinbad the Seafarer.

Included in the famous collection of short stories One Thousand and One Nights, of which it was not originally part (according to the Lebanese critic René Khawan it was introduced in late 18th Century Arab copies), it tells the story of Sinbad, a sailor and merchant who left Baghdad in search of wealth and “because he wanted to get to know the regions and countries of men”, accomplishing seven expeditions that made him experience countless fantastic adventures of all kinds. The original sources of this anonymous account can be found in several written and oral tales of the Eastern world, including The Story of a Shipwrecked Sailor – the first known book of shipwrecks, written in Egypt around 2200 BC – or the 9th Century Book of Animals (Kitab al-Hajawan) by al-Jahiz as well as in Homer’s Odyssey. The name of the main character, Sinbad, of Muslim origin – as well as the number of his voyages seem to have been inspired by the mythical Zheng He (1371-1433), also known by the nickname of Sanbao, the most important seafarer in the history of China, who also made seven expeditions across the Indian Ocean with a fleet of over 300 ships loaded with gold, silver and other treasures.

Although A Thousand and One Nights was translated into French for the first time in 1704 by Antoine Galland, it was a simplified version not including the story, which remained unedited until the 19th century. It was only with Joseph Charles Mardrus’ translation of the 1835 Egyptian edition, that the story of Sinbad the Seafarer became popular in the West, since then becoming a classic of the genre and has exerted a certain influence on many authors (from Daniel Defoe to Álvaro Cunqueiro) and even inspired composers like Rimsky-Korsakov, who dedicated the first act of his Scheherazade to Sinbad.

Fascinated by the existence of a whale-island, influenced by rohk birds, horrified by cannibal monkeys  or simply intoxicated by the perfume of sandalwood, camphor and spices, many still give in to the charm of these adventures that, according to Borges, are nothing more than a great metaphor: the great metaphor of life.

Unknown. (1704) The Book of the Thousand Nights and One Night. London: Cashan Edition.