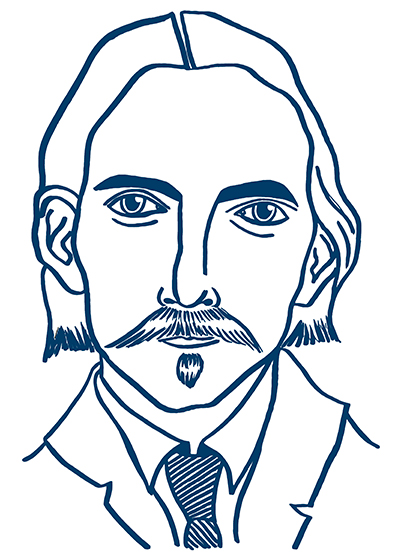 Yo-ho-ho, and a bottle of rum!

Drink and the devil had done for the rest—

The summer of 1781 was unusually cold and rainy in Braemar, Scotland. Unknown at the time, Robert Louis Stevenson (Edinburgh, 1850 – Samoa, 1894) had taken shelter in the highlands with his wife and her children, seeking precisely what the weather denied him: relief for his delicate health. According to history, one day his stepson, who was then 12 years old, was painting with watercolor the shape of an island when he was interrupted by Stevenson. The writer ended up completing the drawing by tracing the Skeleton Island, the Glass Hill and three red crosses. When he was done, he gave a name to that map that looked, in his own words, like “a fat rampant dragon “; he called it “Treasure Island “. “Yes” it’s reported he said, “Here’s a story!” The next morning he had ready the first chapter of what would eventually become one of the best-known novels of all time and the quintessential pirate novel.

Published in weekly installments, from September 1871 to January 1882, under the pseudonym George North, for children’s magazine Young Folks, The Onboard Cook (The Mutiny of the Hispaniola) as it was originally titled was not immediately successful. The story of Jim Hawkins, son to the owners of the “Admiral Benbow” inn, who became a treasure hunter for a pirate and had to face many dangerous adventures, did not convince a young audience, the so-called “penny dreadfuls”, more used to strong emotions and springing action. It was not until its publication in book form in 1783 by Casell Publishing that it began to receive the approval of critics and readers, until today. Gerard Manley, the renowned English poet, stated that “Stevenson shows more genius in one page than Sir Walter Scott in a whole volume”.

Although Stevenson traveled a lot, he never met a true pirate in his life (he was descendant of a prominent family of lighthouse builders) but he did have at hand a number of literary references about this subject, as he himself acknowledged the adventure novels for children of Ballantyne, Marryat, Kingston and Henty to have influenced him to the point that critic John Sutherland ironically said: “The novel should have two pirate flags waving: one for Long John Silver and one for its creator”. It also contains several references to real characters and events; for example, Israel Hands, Silver’s right-hand man, seems to have been inspired by a pirate of the same name who served under Blackbeard (who is also mentioned in the story) and whom he shot and left behind on the ground, a very common practice among corsairs suffered by another character in the novel, Ben Gunn. Stevenson’s sources of inspiration even reach the nautical songbooks of the time and especially the salomas, chanteys boat crews used to sing while working, to find different songs as they jumped from one boat to another. Simple and rhythmic, they served to entertain the sailors while performing repetitive tasks such as pulling the lines or rowing, so their content was not very poetic if not directly obscene. And there is no doubt that, in addition to the world’s most famous pirate wooden leg, treasure chest and talking parrot, Treasure Island bequeathed to posterity the world’s most famous sea shanty, the one that millions of children around the world have been singing: “Oh, oh, oh, and a bottle of rum”.